On March 21, 1967, the 3-22 and 2-22 Infantry, along with 2-77 Artillery and 2-34 Armor, earned the Presidential Unit Citation for their actions that resulted in over 600 NVA and VC killed in action.
US casualties were 31 KIA and and 187 WIA. In summary, LTG Jonathan M. Seaman in his commendation to the Battalion states: " I want to extend my congratulations to you and your magnificent troops for their major victory at FSB Gold on the 21st day of March. Fighting against a numerically superior and well equipped foe, elements of the 3rd Brigade, 4th Infantry Division, with supporting elements, inflicted a devastating defeat on major elements of the 272nd Main Force Regiment. This is the most decisive defeat the Viet Cong have suffered in the III Corps Tactical Zone in my 18 months in Vietnam."

Soui Tre is where the Battle of Fire Support Base Gold took place.

From: Dave Gehr, C/3-22, 66-67
On March 19, 1967, while participating in Operation Junction City, Phase II, the 3-22 Infantry made an air assault landing into LZ Gold to secure a forward support base for the 2-77 Artillery. A perimeter defense was established with Company A assuming responsibility for the western sector and Company B assuming responsibility for the eastern sector. Three batteries of 2-77 Artillery occupied 18 firing positions in the center of the perimeter to support the 4th Infantry Division's 3rd Brigade Task Force. During the period of March 18 - March 20, 1967, the Battalion's elements constructed defensive bunkers, planned and rehearsed contingency defensive actions, conducted aggressive daylight patrolling within the defensive tactical area of responsibility and established night ambushes.

On March 20th, while scouting the area with his command helicopter, COL Garth, Brigade Commander, saw 30 to 40 Viet Cong in an open area. He quickly radioed to LTC Bender at FSB Gold. This was the first sign that trouble might be at hand. At 0635 hours, March 21, the defensive perimeter came under heavy enemy ground and mortar attack. The first indication of the impending attack came at 0631 hours, when elements of the approaching VC assault force were engaged by a twelve man ambush patrol from B/3-22. Simultaneously, FSB Gold began receiving heavy mortar fire from VC 60mm and 82mm mortars located in firing positions to the northwest and southeast. About 0635 hours, the Recon Platoon 3-22, which was located to the southeastern portion of the perimeter, engaged a large VC force, which had approached to within 35 meters of the friendly positions. Within minutes, the entire perimeter was attacked by wave after wave of VC firing recoilless rifle, RPG-2 rocket launchers, automatic weapons and other small arms.

As the attack continued, the three Artillery Batteries began counter firing in an effort to neutralize the VC mortar concentration, which continued to rake the entire fire support base. During the initial assault, Company B reported that its 1st Platoon positions (southeastern perimeter) had been penetrated and that the reaction force from the 2-77 Artillery was required to reinforce this section. At 0701 hours, this reaction force began moving towards the 1st Platoon's positions. In the meantime, the remainder of the perimeter kept the enemy at bay with a continuous barrage of small arms and machine gun fire. Supporting fire from two 105mm Howitzer Batteries and a Battery of 155mm Howitzers, self propelled (SP), was called in at a range of less than 100 meters from the outer perimeter. At 0711 hours, the Company B Commander reported that his 1st Platoon had been overrun by a human wave attack and that the Platoon was surrounded. Air strikes were called in to the outer edge of the perimeter and along the eastern wood line. A forward air controller (FAC) arrived on the scene in a Cessna O-1E Bird Dog at 0714 hours. The Cessna was shot down by heavy machine gun fire while flying low over the perimeter after directing only one air strike. Both the pilot and the observer were killed.

At 0752 hours, B Company's Commander requested that 2-77 Artillery fire beehive rounds " A hitherto classified anti-personnel shell that spits 8,000 finned flechettes (steel darts) each an inch long, whose lethal stings turn an ordinary artillery piece into a monster shotgun" into the southeastern and southern sectors of the perimeter. A twenty man reaction force from A Company was sent to reinforce B Company's northeastern perimeter, which had been penetrated by another human wave attack. Two more Cessna O-1E's showed up at 0755 hours after being scrambled from Ben Hoa. F-100's and F-4 Phantom's were arriving by the squadron. Bombs were bursting at the edge of the perimeter. An AC-47 Dragon Ship showed up with gatling guns blazing into the enemy who were caught in the open. By 0840 hours, the northeastern, eastern, and southeastern portions of the perimeter had fallen back to the preplanned secondary defensive line around the guns of the Artillery Batteries. During this time, the VC penetrated within hand grenade range of the Battalion Command Post (CP) and within five meters of the Battalion Aid Station.

To counter this new threat, a continuous and devastating hail of small arms and automatic weapons fire was directed at the frenzied VC attackers, while the remaining 105mm Howitzers of the Artillery Battery began firing beehive rounds "direct fire" into the attacking VC masses. Bombs were dropped within 50 meters of American positions and supporting 105mm and 155mm Batteries threw up a continuous wall of high explosives. When the 2-77 Artillery ran out of beehive rounds, High Explosive (HE) rounds at charge one were fired into the charging VC at point blank range. At 0900hours, the situation, though tense because of ammunition shortages, was still under control. The northern, western and southern portions of the perimeter were intact and under moderate pressure from the VC who had worked their way up to within fifteen meters of friendly positions. By now there were 85 fighter planes on the scene. The aircraft played a major role in breaking the attack. Although pushed in, the northeastern, southeastern, and eastern portions of the perimeter were still intact. At 0901 hours, a relief column led by 2-12 Infantry broke through from the south and linked up with the besieged defenders. Joining force, 2-12 Infantry supported B Company's counterattack from west to east to reestablish the original perimeter. At 0912 hours, a Mechanized Infantry and Armor column from 2-22 Infantry and 2-34 Armor broke through from the southwest and began sweeping forward along the tree line toward the northeast. By 0928 hours, the original perimeter had been reestablished and mopping up operations had begun. By 1045 hours, medical evacuation of friendly casualties and ammunition resupply had been accomplished. The battle area had been secured !

Artillery and air strikes continued to pound the route of withdrawal of the broken and routed VC attackers. For four hours, 400 men of this Battalion held off a determined attack by 2,500 hard core guerrillas consisting of six Battalions controlled by the 272nd NVA Regiment. At present, known VC casualties include 654 KIA - body count. 200 KIA - probable, and 11 VC captives. US casualties were 31 KIA and 187 WIA. 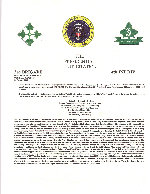