History
Headquarters
Roll Call
Locator
Links
KIA List
Membership
Deceased
Hot Poop
Guest Book
Books/PX
VN Era
Music
War Stories
Soui Tre
FSB Burt
Ap Cho
Good Friday
Larry Welsh
Heroes 66-67
Heroes 68
Heroes 69-70
Do you have names to go with these faces? and Archive Photos
ANSWER: There is a picture of Sgt. Dubose (KIA 1-2-68) and two other men cleaning weapons at the rear of a tent. The tallest guy is David Smith KIA 1-2-68.
>>Loel Hunt
Two pictures sent from Randy Wehner. We need your help with identification! Here is part of what Randy wrote:
pic is of, I think, Sgt Dubois [it's a yes, he's been identified]. I need other 3rd plt members from the summer of 67 to help me out. On the back of the pic I had wrote (my squad colored guy is now out of action got shot on chest and hand. The guy with out shirt closest also.) I do know the tent is just south of the command center. I also have a pic of one of my squad members with out shirt that needs to be I.D. Possible K.I.A. Time has erased a lot. I think if everyone would bring their pics to Colorado and set up tables by time plt and year we could find these Heroes. Some of these guys have no family left except our band of brothers. If we could find out where they went to high school we could go to libraries and get yearbook pics. 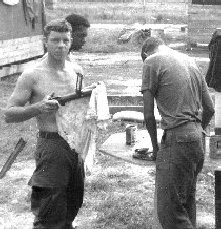 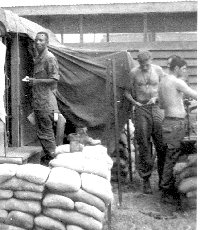 This photo was taken in front of the headquarters area in Tay Ninh in early 1970. It was an awards ceremony. I'm guessing the guy on the left is Sylvester (Ellis). Next to him I think is Larry "Tennessee" Lowrance. Below him is Aaron Tilley. The guy with his arms folded is Jimmy Wright. The guy touching his nose is Bob "Doc" Breault. The last guy on the right is Lt. Schmidt. 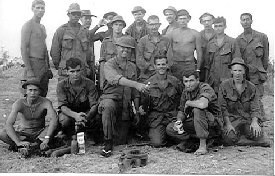 L - R Top row
Roger Martin
Charlie Banks
Rose   (KIA)
Rubin Etienne
Gary Foster
James A. Asher
Nick Dragon
Chuck Kraemer
Gregory b. Hall
Dan (Jeff) Delancy
Larry R. Gouine
Johnny Paul Morris
. L- R bottom
Charlie Brown
Herbert S. Covert
Lt. Pierce
John L Sayers
Harold Keys
Thomas L. Boone
Charlie Co. 4th Plt. 67- 68  Names supplied by Nick Dragon.
This was part of 3rd platoon at FSB Washington near Tay Ninh in March, 1970. A couple of short weeks later, Erdman was KIA at the Straight Edge Woods. Meadows and Lt. Schmidt were both wounded in the same action and medevaced out of country. Sgt. Daniels was later seriously wounded in the Cambodia friendly fire arty incident. This picture is on my screen saver at work. I've been able to tell others about the great unit that I served with. The feedback I get is always positive.
Thanks for the great work that you, Bill and the others do on behalf of Charlie Company. Without you guys I wouldn't have been able to stay in contact with all my Viet Nam buddies. Jim Cunningham
Far left to right;
Richard Rose
Ronnie Kuhn (Front left)
Larry Prentice (Black Soldier)
Sgt. John Hendrix
Marty Kochlesberger
Lt. Eric Schmidt (Holding steel pot)
John Meadows
Johnny Johnson (In back, flashing peace sign)
Sgt. "Tennessee" Lowrance
Sgt. Rex Daniels (In back)
Bob "Doc" Brault
Dale Erdman (Front right)
Phil Martin (Far right)
Circa 1967 - 4th Plt.
Photo sent by Randy Wehner and identification by Dave Moran.
Left to Right
KIA James Lind
Dave Gehr
? Unknown 'Tank Guy"
Ruben Golding
Dave Moran (standing)
? Unknown (sitting on right) "Tank Guy"
This is a picture of Fred Chitwood (standing on right) in the summer of 68. Fred was KIA in August. He is pictured with a bunch of 1st Platoon guys. We were in Dau Tieng pulling some perimeter guard and ambushes. On this day we marched across the base to the Latherite pit to zero in weapon. Sniper fire ended that exercise. Anyone recognize themselves? Please let us know.
Ron Hudson 1st Plt. left & Andy Crawford, KIA, on right.
This is a photo of J.C. Dyer, snapped while serving with Charley Co. My thinking is, it would be more appropriate for the KIA Memorial page.
From: Your Brother, Dennis F. Krause. 1st Platoon
Bill Schwindt found this blast from the past in the Associations historical albums.
Kicking back having a brewski at the PX, Ft. Lewis, May 1966, C/3/22 4th Plt. From L to R.
Roger Omalza, Barry Bovee, David Gehr, Fred Kaime Kama (KIA 9-6-67) 1st Plt., Ray Underwood
From David Moran:
Eldon Garmillio is standing to the left of
Komoto. He has a green towel around
his neck.
Jeff Einbinder sent a better picture of James J. Lind, KIA 1-2-68. L. to R.: Barney Branham 9th Div., Lind, Key, Einbinder. 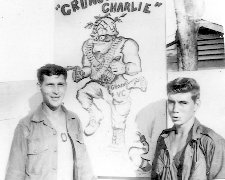 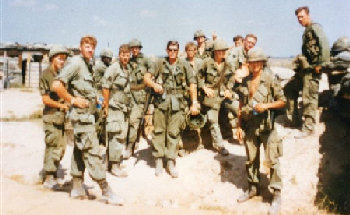 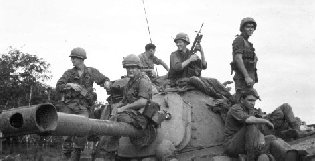 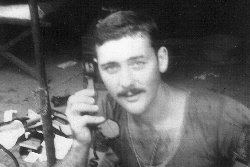 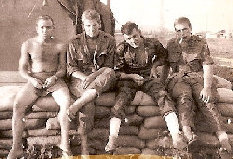 THIS PICTURE WAS FEATURED IN LZ LAMBEAU WELCOMING HOME WISCONSIN'S VIETNAM VETERANS MAY 21-23 2010.  A ROAD CLEARING MISSION, THE GUYS ARE  NAMED ABOVE. SUBMITTED BY JOE NETT 66-67. Check out lzlambeau.org for more Vietnam information.

Stuff too good not to save!
Barbara Stapleton, the daughter of Jose Gonzales was going through her fathers pictures and found what appears to be Christmas in 'Nam '66.  Photo on right. 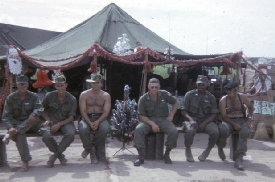 WE DID IT! MISSION ACCOMPLISHED as far as the pictures go.

We have been looking for pictures of those killed in Vietnam from our company for a lot of years and getting one of Albertis Williamson, KIA 2-10-68, completed our mission of getting all 95 of them. Rick DeNomme, after a lot of diligent work and follow-up, corresponded with Alburtis's sister Loretta Nelson who was able to locate her one picture of her brother and send it to Rick.

From Rick: I have made crosses of all 95 of our HEROES and have their picture attached to each. I put them up in my yard every Memorial Day. After getting the crosses made and the pictures attached to them it started brothering me that Albertis Williamson did not have a picture. I decided to see what I could do about it and started the research process, after all this time I would like to report that I have succeeded in getting a picture of Bert (as his family called him).Bill, After working on this project I sure do appreciate what you and others have done to locate these HEROES of ours.

Here are a few pictures Ruben Sanchez wanted to share with you.  He says: I remember at one of the reunions I saw pictures of C/2/22 (Mechanized) that joined up with C/3/22 in Vietnam.  That's the unit I came from as well as others of the basic training cadre.  The pictures are from 1964 & 1965.  I thought you might get a kick out of seeing the pictures.  You will see some of our personnel carriers at our barracks, some crossing the Columbia River in Yakima and a couple of pictures in C/3/22. 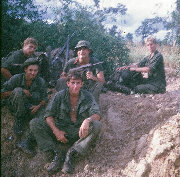 Picture on left - On the far left, just barely in the picture, is Dennis Krause, my RTO; I (Mac Reppert) am in the foreground second from the left and to the right of Denny;  I dont know who the guy in the jungle hat is, but I dont think he was a chu hoi  I think he might have been someone from the BN S-3 shop;  and the guy on the far right was our CO Jim Hansard (later KIA). The picture was taken by acting PAO PFC Herb Burdett just after a successful ambush my platoon triggered on a trail at the edge of the Michelin Rubber on an NVA convoy of a dozen ox carts loaded with supplies, just North of the village of Dau Tieng in the first or second week of August 1968.  Records recovered from the body of the NVA Commanding Officer indicated an escort force of 150, although there can be no certain knowledge of this. Picture submitted by Mac Reppert

Dave Gehr sent in these vivid photos (below). Photo on the left is John Wolcott. Center photo is Joe Nett and others. Photo on right is from 1967. Bring back memories?!
As always, click to enlarge.
Some pictures submitted by Jose Gonzales. Click here to link to photos! 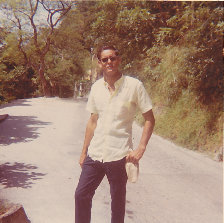 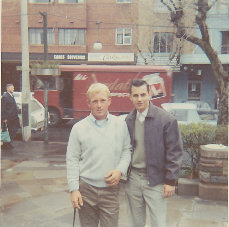 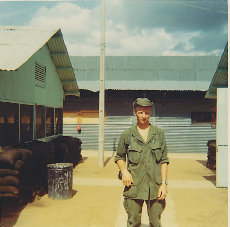 Who are these C Co. Guys from 1968? Click on the pictures to enlarge.
Jim Dice, Dennis Krause, and Michael Dragan have requested these photos be posted on the website.
From Jim Dice: The Photos are C Co. guys from 1968. My guess is May - Dec. I bet somebody can ID them fast.
From Michael Dragan: Denny Krause found some old Vietnam pictures of when I was on R and R - Do you know who these guys are?
Thomas Boone 68, Identified himself.
Orlando 2013
Wash. DC 2011
San Diego 2015
Next
Back